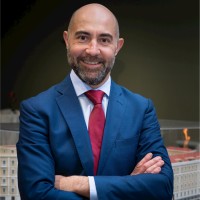 Francesco started his career graduating in Languages in 1996 and subsequently serving as voluntary in the Italian Army, paratrooper division in Florence. After going back to his native Sardinia, he worked as surveyor for a building company. Alongside the job, started his career in hospitality organizing and promoting clubs and bars the Island, before deciding to change career path and move to the U.K. in 2002.

He started bartending at the hugely successful Langan’s Brasserie in 2003, where he got the foundation of hospitality and the first grasp of quality service. After a successful year at the busy and iconic restaurant of the West End, he started to work for the Scottish Hotel Company Malmaison, at their most successful venue of the capital in Charterhouse Square. The cocktail bar became quickly one the hottest spots in Farringdon and frequented by an eclectic crowd.

In 2005 he was asked to lead the opening of the bars at the Malmaison Oxford, the reconverted prison which featured a champagne bar and a cocktail bar, which became quickly one of the busiest and most sought for venue in town.

A year later had decided to accept the challenge at a fantastic property in the fashionable North East coast of Sardinia. At the Pellicano d’Oro Hotel he lead a talented team and operated the bar and the restaurant at the luxurious property on the beach side.

In 2007 he decided to re-enter the U.K. capital and was employed as mixologist at Kenza, where contributed in re-designing the cocktail list and the overall success of the restaurant.

A year later started his challenge at Morton’s, successfully opening the night club, a prime London hotspot for celebrities and socialites in Mayfair.

In 2010 started his most successful operation at The Savoy, where he was part of the management team who reopened the hotel after a major refurbishment, not long after he was promoted as Bar Manager of the American Bar  in 2011 was awarded “Best Hotel Bar in the World” at the Tales of the cocktails and “Best Hotel Bar” @ Virtuoso 2011, working alongside industry legend’s like Erik Lorincz and Salim Khouri.

After 3 successful years he was head hunted to join the team at The Berkeley as Blue Bar Manager and led a fantastic team to amaze the patrons of the celebrity hunted hotspot of Knightsbridge. The Berkeley underwent a restoration of the Food & Beverage departments and he planned and designed the new bars and menus.

He later took the Beverage department at the Restaurant Ours, an award winning restaurant and hidden gem in Knightsbridge area.

He is currently managing the Tiki Beach at Forte Village, the most beautiful beach bar Sardinia has to feature.
In the fantastic set up of the best resort in the world, Francesco takes to the island the award winning cocktails of the celebrity haunted Mahiki in London, with their Tiki cocktails and fun atmosphere paired with the most friendly and tailored service.

Send us your application